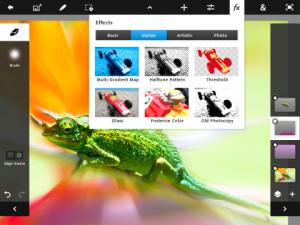 Since the day the iPad launched, people have wondered about the overlap between the Mac and the iPad. Lots of things, like browsing the Web, checking email, word processing and other tasks can be done just as easily on the iPad as on a computer. Pro-level apps have been the divider. Do you want to use Photoshop? Well, you need a computer for that.

But soon this may no longer be true. A rumor reported by Bloomberg has Adobe announcing Photoshop for the iPad this fall, with release next year. For a while now Adobe has had apps like Photoshop Sketch and Photoshop Express in the App Store. But a version matching the full-fledged pro app would be something remarkable and new. Yo can imagine a graphics pro giving up a computer and getting a 12.9-inch iPad Pro instead.

There would then still be plenty of pro-level apps missing from the iPad, such as video editing tools and software development tools. But with Photoshop moving to iOs, many other tools may follow.