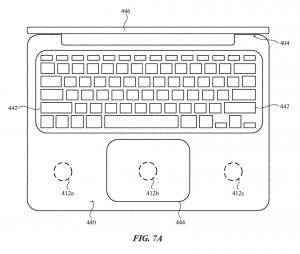 Digital Trends has an interesting look at an Apple patent that shows MacBooks and iPads acting as inductive (wireless) chargers for iPhones and Apple Watches. You just stick one device on top of the other and it charges. But the headline they pull out of this patent is about a minor point where the MacBook appears to maybe have a touch screen.

I think the charging idea is the headline myself, and the touchscreen is a stretch based on some words in the patent. The patent also shows multiple areas where you can charge another device, including right on the trackpad. This is probably just Apple’s patent-writers covering all bases. If Apple offers a charger in the MacBook’s surface in the future, they want to make sure that someone else hasn’t patented the idea first and then tries to sue them. So they put charging surfaces everywhere. You see this a lot in patents, and it is good fodder for rumors.

Comments: 2 Responses to “MacBooks May Become Charging Pads for Other Devices”

Karl: Not if you have it plugged in. Even on battery and Apple Watch wouldn’t take much to charge. You can already charge right now with the cable and make decisions about your power based on your needs.