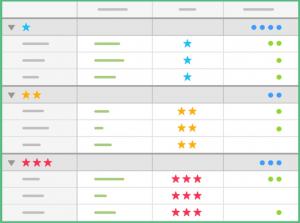 In addition to the release of iOS 12 today, Apple also updated their three office-like apps with a few new features. The update includes compatibility with new macOS Mojave and iOS 12 features, such as Continuity Camera and Dark Mode.

Numbers does gain one new feature called Smart Categories, which should make a lot of spreadsheet users happy as it looks like it returns the old pre-2013 Categories feature, also known as a substitute for pivot tables. All three apps also gain the ability to record audio directly and insert it as media.

I’m still learning Pages and Numbers, will you have the updates on your courses?

Janice: My Pages and Numbers courses are current, created after the last major changes. I have added lessons to cover new features since then, but the basics remain the same.

When I bought my Mac the trainer at the iStore conveyed to me me that Number is inferior to Excel and not worth learning. In your training you gave merits to both spreadsheets, where (on the upside) Number allows for multiple spreadsheet on one page, but (on the downside) not having a pivot table functionality.

Would you care to comment on the current Numbers compared to Excel merit as I don’t know – but would like to understand – the Numbers perspective better.

Henry: With the addition of Smart Categories, you can’t say that Excel’s Pivot tables is much of an advantage anymore. But they still are different apps and there are many small differences. Some people will prefer Excel because they have been using it for 30+ years. But why even debate it when Numbers is free? If you have a Mac, then why not get Numbers and try it for yourself. If you find you don’t like it, you can always buy Excel later on.