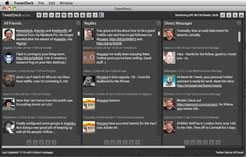 If you want to immerse yourself in Twitter, then TweetDeck might be your best bet. Three or four columns are the standard, and you’ll often find TweetDeck users with their entire screen taken up with TweetDeck.
The standard columns are All Friends, Replies and Direct Messages. But you can also view tweets almost any way you want by creating groups and viewing only tweets by the people in those groups. You can filter any column by keywords as well, including and even excluding tweets with certain words. That makes ignoring an event or topic easy.
An interesting StockTwits column can zero in on tweets about a stock symbol from your friends or all over Twitter. You can also connect to the 12seconds service to view short tweet-like videos.
TweetDeck also have the ability to look at Facebook status messages in a column, something that most other Twitter applications cannot do.
All in all TweetDeck could be the most powerful of all Twitter applications. Plus, its free.
Get TweetDeck