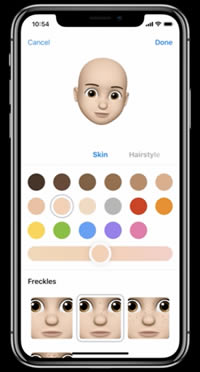 There was a lot more announced at this year’s Apple WWDC than I anticipated. I’ve very excited about a few things in particular.

On iOS, it finally looks like Siri will be opening up to developers, a bit. An App called Siri Shortcuts will allow you to create phrases you can activate with Siri and that hook into apps that support it. This looks a lot like WorkFlow and I’ll be it is taken directly from that.

There’s some work on the default iOS apps. Stocks and Voice Memos will finally come to the iPad. Stocks will also get a hook into the News app and be able to display news from each stock you follow.

Apple is implementing some things that have to do with time management and overuse of mobile devices. You’ll be able to set your own voluntary time limits on apps, and force them on your kids too. You can also view a report of how you spend your app time.

A huge deal, I think, is the introduction of Memoji. These are like Animoji, the animated characters you can use to send voice messages, but you can customize them to build your own and even make them look like you. They will be available in Messages, but also in FaceTime. I’d rather send video voice messages using a cool avatar rather than just plain video. I think a lot of people will as well.

Another huge deal is group FaceTime. You’ll be able to have 32 people talking all at once. Teens have been wanting this for a long time.

How about the Mac? The new macOS will be called Mojave as many predicted. It will include dark mode, stacks of icons on the desktop, a new Gallery View to replace the CoverFlow view, and a new Mac App Store design. Plus, Apple seems to have convinced a lot a Mac App Store hold-outs to come to the store (Panic, Bare Bones, Microsoft and maybe Adobe).

There will also be some new apps. News, Voice Memos, Stocks and Home will all come to the Mac. In fact, Apple says they are porting these from iOS using some new tools, and that those tools will be available to developers in 2019 so they can also build cross-platform apps.

There are some interesting enhancement to screen capture, where you can see all of your options clearer and go right to markup and sharing after a screen grab. Also, it looks like you’ll be able to trigger your iPhone’s camera to take a picture or scan something from your Mac.

Comments: 13 Responses to “WWDC Keynote: New iOS And macOS Features To Get Excited About”

The “news” app from Apple sounds like a great way to learn everything exactly as our masters ordain. But, I’m just making a guess based on their reputation.

brad: Not sure what you are getting at here. Have you used the News app? You can select your news sources, topics, etc. Very customizable.

i really like Mojave for my macbook pro but i don’t know about on my 2011 imac because it changes the file system to APFS, which i read that it doesn’t really help a mac with a hard drive. any suggestions?

tim: I haven’t seen anything that says Mojave forces you to switch to APFS. A new feature is the ability to use APFS on HDDs, but I don’t see anywhere where it says you need to use APFS on your internal drive. Even so, what is the issue there? APFS should be an improvement, or at least the same, so why don’t you want it? Either way, you probably can’t use Mojave on your MacBook Pro because it is too old. The requirements list 2012 MacBook Pros or newer.

I have been asking Apple for group FaceTime ever since iChat disappeared. Now I can talk to all my grandchildren at the same time!
Thanks for the quick overview of the Keynote.

I’m not excited regarding the info you provided about Apples new ‘stuff’, why am I underwhelmed. Not one of those things make the most annoying features of iOS or macOS simpler. I refer to the constant two-step dance. Authentication for some might be life or death but to me simplifying some things in macOS and iOS should be paramount. Perhaps this doesn’t stick close enough to the topic and if it gets deleted that’s ok, at least I vented.

joe: That is certainly on-topic. By two-step, do you mean two-factor authentication? What’s your problem with that. Set up right you should only have to deal with it here or there.

Gary my macbook pro is a 2015 its my imac thats 2011 with hard drive and your right its too old for mojave. but i did read somewhere that it would switch to APFS and that that file system doesn’t really help when you have hhds.

With a late 2009 iMac, I guess I stop with High Sierra. How will that relate to Mohave. For instance, App store changes. What will I see?

Milner: Hard to say until Mojave is released. You will probably see an App Store that looks the same as now, but they could release a new minor version of the App Store app for High Sierra. Most likely, things will stay the same for you.

There is no Contacts update yet. Would like to see these items in Mojave. Not sure if any are in any Contacts plug-ins or extensions. Added these to Apple feedback years ago.

Multiple birthdays for families on one card
Porting Anniversary to Calendar
Single birthday but multiple anniversaries?
On macOS Select and view multiple Groups (as on iPhone)
Show a “list” of duplicate cards to select to merge or delete
Sync Smart Groups to iOS
Add more “Sort By” options

Robert: You have suggested these to Apple? https://www.apple.com/feedback/

Yes – almost every time Apple indicates an update coming to the X OS or macOS for years. Contacts really needs fixing to be a top-of-the-line app. Not sure if they even have a Contacts engineering department. Even the feedback site does not have a Contacts section under the macOS or X OS. Calendar has its own section in feedback. They need to fix their own feedback website.